😬 The Subtle Art Of Fucking Up

A Counterintuitive Guide To Creative Badassery 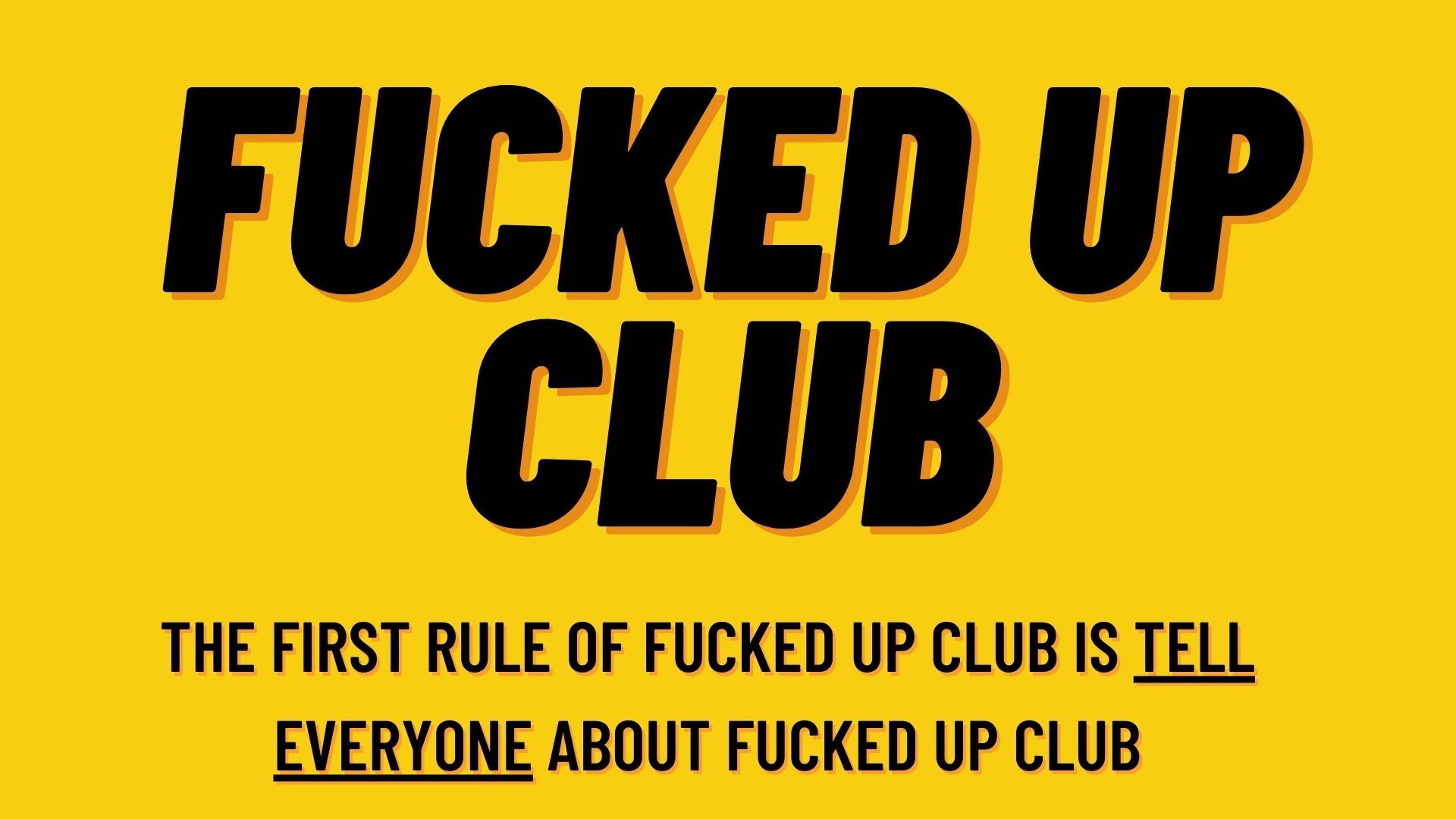 It brilliantly satirized societies’ obsession with consumerism and how it tapped into our identities.

The more nice shit we owned, the better we felt about ourselves….which, of course, is a dangerous and warped delusion.

“We buy things we don’t need, with money we don’t have to impress people we don’t like.” — Fight Club

We have moved on.

Materialism is just one part of our complex modern screwball society.  If Fight Club was released today it would satirize successism.

Society is obsessed with perfection, with succeeding, never failing or making mistakes.

“We airbrush out our failures and make ourselves look good to impress people we don’t like.” — Fucked Up Club

People are scared to make mistakes and look stupid.

This manifests itself in many negative ways 👇

Paradoxically, the main source of fucking up is our failed attempts 👆 to avoid fucking up.

All of the above means teams, companies, and individuals perform way below their skill sets by getting in their own way.

Disclaimer: We are going to talk a lot about fuck ups. There are fuck ups and there are FUCK UPS. Not all fuck ups are the same👇

I have fucked up. Repeatedly. Sometimes spectacularly.

You have, too. If you haven’t fucked up: you’ve either never tried to achieve anything of significance or you’re telling porkies.

Welcome to Fucked Up Club.

We’ve all fucked up. Yet, we kinda deny it, even hide it. We make excuses and secretly beat ourselves up as we are ashamed of it.

We airbrush out failures and photoshop our wins to embellish them. For what…?

To be accepted. To use our achievements to impress people we barely know and don’t even like.

This doesn’t make us bad people. Quite the opposite in fact. We just want to be liked, which is human nature, after all.

But we’re playing the old rules from an outdated game.

We’re following the protocols of a society that demands perfection and makes failing a ghastly occurrence that we should feel ashamed about.

So, we play the perfection game. Pretending everything is fine but inside we are hurting because, well, fucking up is hard to do.

At the root of the perfection game? Comparison. And caring too much about what others think.

By any metric, I was a successful entrepreneur in the music industry but it didn’t always feel like that as I was comparing myself to people who were even more successful —and I felt a bit of a fuck up.

Which was really fucked up!

I decided I needed to do more, push myself harder. My obsession with not fucking up led me on a path to spectacularly fuck up.

A bonus point fuck up! Great…Yay, me! *sarcasm*

And, of course, I then became ashamed of my fuck up.  Eventually, to stop me from going gaga, I started writing about my fuck ups which seemed to help others with their fuck ups, and writing and consulting became a thing.

Two years on, the principle I have learned 👆 from my spectacular fuck up has changed my perspective entirely.

I have come out the other side as a more badass creative, rebellious, risk-taker.

I no longer give a fuck about fucking up. I no longer compare myself with others. I mean, thoughts still drift through my mind but I don’t let them fester.

What others think or do is out of my control.

While I’d rather not fuck up. I am at peace with fucking up. You see, fucking up is just another step closer to not fucking up.

Success in any project is about fucking up and iterating methodically until you’re no longer fucking up.

Product/ service market fit is really just a systemized series of fuck ups performed and tested consistently to diminish fucks up with a goal of reaching zero fuck ups.

If you think about it, fucked up club is the same side of the ‘subtle art of not giving a fuck’ coin.

No longer giving a fuck about fucking up disempowers the fear of fucking up. This  increases confidence, creativity, and, risk-taking.

Everything is math, really.

Not giving a fuck about fucking up is the key to high-performance.

Manson got this concept from Alan Watts the modern British philosopher, who often talked about backward law. I have written about it many times myself.

“When you try and float on the surface of the water, you sink; but when you try to sink, you float’ and that ‘insecurity is the result of trying to be secure’ — Alan Watts

Backward law here is: fucking up is the result of fearing you will fuck up. It massively limits your potential because you don’t want to come across as:

In 2015 Google conducted deep research into the traits their most successful teams possessed. They called it The Aristotle Project.

They looked into 180 of the highest performing teams in Google to assess the common factors for their success.

They were shocked. It was not the level of education, the background, or the experience of the teams, it was whether psychological safety was present within the team ( Duhigg, 2016)

What is Psychological Safety?

Harvard Professor, Amy Edmondson described it as “ a belief that one will not be punished or humiliated for speaking up with ideas, questions, concerns or mistakes, and that the team is safe for risk-taking”

In other words, the key to Google’s best-performing teams was the permission to fuck up. A safe place where everyone can put forward ideas without fear of looking stupid, voice concerns, and question conventional wisdom.

How about that? You don’t need MBAs from Harvard ( although they certainly help) or vastly experienced team members for high performance.

Anyone, on any team, in any company, can perform at their absolute best by simply removing the fear that hamstrings their creativity and innovation.

And it’s not just Google that uses psychological safety as a high-performance tool.

The #1 ingredient in the secret sauce of Google, Apple, Pixar, and Tesla is allowing their teams to take risks, make mistakes, and fuck up, thus unshackling their full potential and true creative power.

And yet society at large is still stuck in their bullshit dance of trying to avoid mistakes in order to look good and impress people they don’t like.

Regular readers may be rolling their eyes at this point, such is the regularity of my reference to the NASA Creativity test research.

But bear with me. This research combined with creative thinking frameworks and psychological safety is the key to your innovation badassery.

The best way to create psychological safety is to openly talk about our fuck ups and remove the stigma.

Project leaders, bosses, and CEOs must talk about their failures and mistakes.  We all fuck up. We all shit in toilets and wipe our asses. Pretending otherwise is just nonsense. When leaders display vulnerability and honesty it encourages high-performing innovation.

By openly talking about our fucks up we create an environment of enthusiastic risk-taking rather than fearful trepidation.

So there you have it: the key to performing at our best is the permission to be ourselves, create bonkers ideas that are so crazy they might just work, without people taking the piss.

What Fucked Up club is:

What fucked up club isn’t:

You now have two options available to you:

A) Do nothing and let your fuck ups fester within you.

B) Liberate yourself and start owning your fuck ups on your upward trajectory to creative badassery.

Reply to this email and answer these three questions:

I, in return, will reply back and tell you one of my fuckups and the lessons I learned.

What’s the point in that? Well, we will both learn something new and you can start to own your fuck up(s)

Fucking up is human. So is our vulnerability. Let’s be more vulnerable, creative humans who don’t give a fuck about fucking up.

Got value from this? Then please be a good human and share it to help another human 🙏

His latest article in the Idea Economy, “There will never be a creator middle class and why that’s good” is here

👉 I also create workshops to guide founders ( and, or, their teams) through innovation frameworks that solve problems, generate solutions — and, crucially, make decisions that get shit done 💩 ✅

👉 If you want to ask a question/ give feedback/ or swear at me, simply reply to this email ✌️