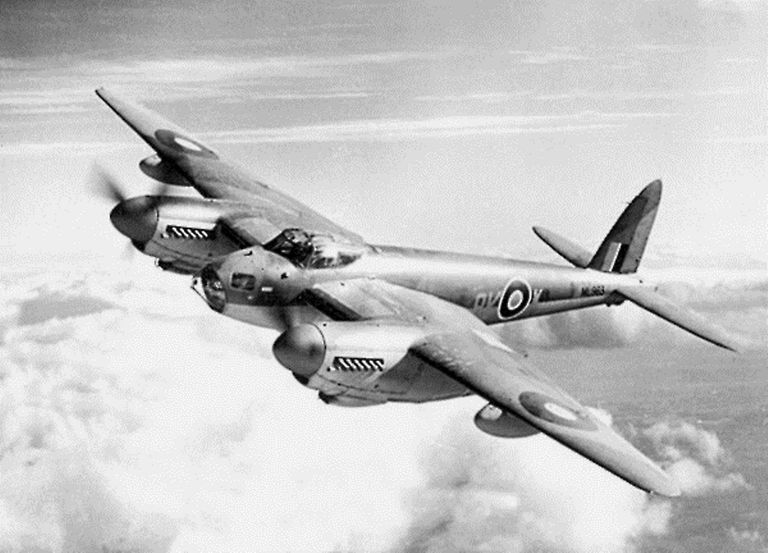 In World War 2, the British bomber was called the Lancaster.

The problem with bombers was they were too slow and thus easy targets, so the allied forces built more machine gun turrets and used more gunners to try and protect the planes.

This, of course, slowed them down further.

The American bomber was even bigger than the Lancaster. The B17 dubbed the “Flying Fortress” needed a crew of 10 and had 13 machine guns.

Both planes suffered heavy losses from the fatal ground and air attacks.

The conventional thinking at the time was how to get more machine guns and crews onto the planes without slowing them down further.

Captain Geoffrey de Havilland of the RAF was thinking differently. He announced he was going to design a bomber that was faster than German fighter planes.

People laughed at him.

But Geoffrey didn’t care. He redesigned everything. The plane was made out of wood for starters, it had no machine guns and only required the pilot and navigator to fly it.

The Mosquito was much smaller as a result. It still carried 2 tons of bombs but it was faster — much faster.

Due to the two powerful Spitfire engines, the wooden chassis and lack of crew and machine guns, it was faster than the German fighter planes with a top speed of 408MPH.

It was also pretty nimble and responsive for a bomber which gave the British a competitive advantage.

The mosquito’s speed and agility made it perfect for strategic city raids where it could get in and out of cities fast after bombing key targets.

Mosquito raids were responsible for taking out Nazi headquarters and other key strategic strongholds in cities across Europe.

Mosquito survival rates were several times that of the bigger planes proving that the best defence was speed and not more machine guns.

This is what happens when you stop thinking conventionally and start thinking differently.

There’s not a founder/ CEO on the planet who doesn’t want more clients, generate more revenue and gain a competitive advantage.

Conventional thinking is to address this problem with more advertising and marketing.

Advertising and marketing are the machine guns of business. To defend our margins from competitors we build more and more machine gun turrets.

This can work if you have deep enough pockets. Only 4% of advertising is remembered positively.

But really we need to start thinking differently.

That’s not to say advertising and marketing are not important. Of course, they are — but if your product or service is pretty much the same as everybody else’s then it doesn’t matter how much you spend promoting it.

The smart thing to do is to think differently. Go against conventional thinking, create a product or a service that is different from your competitors — and then spend money marketing it.

Michael Porter is a Harvard Professor who specialises in competitive advantage.

In his book, Competitive Strategy he argues there are only three ways to gain a competitive advantage:

Porter’s work is taught in every MBA class worth its salt. But it was first written decades ago. Times have changed.

In modern business and a content-driven world, there is now a fourth way to gain a competitive advantage which is thought leadership.

Some might argue that thought leadership is another form of differentiation but I disagree, it’s an entirely different strategic discipline — but that’s for another day.

Unless you have a different value proposition you’re just another company clustering in a crowded market.

Thinking differently gives you an edge.

When Branson launched Virgin Atlantic he only had one route from London to New York with one plane.

British Airways is the UK’s flagship airline. It is the biggest airline in the world based on fleet size and international operations. It is reported that the chairman, Lord King, laughed at Virgin.

What does this hippy know about starting an airline?

Yet less than a decade later, Lord King and British Airways were forced to pay Branson £3.6M in damages and apologise for the “dirty tricks” campaign they used in an attempt to “kneecap” Virgin Atlantic out of business.

They weren’t laughing then, for sure.

Branson used innovation to differentiate his service which created a competitive advantage.

He was thinking differently.

When you’re looking to stand out and gain a competitive advantage, the first thing you must do is an analysis of your competition’s value proposition.

You do this by creating a strategy canvas. This is what I do with consultancy clients.

You speak with customers and find out the values the business provides and exactly how important they are to them.

Then you score both yourself and your competitors. This allows you to see the gaps and opportunities.

Most founders believe you need to make radical changes to disrupt.

This can be true but in service industries, it’s often just a series of small differentiations where the sum of the parts combined change the experience entirely.

He is a master of creative disruption yet he realises it’s the sum of the parts, not a solo radical differentiation that often matters. It’s a combination of the little things that together make a successful challenger brand.

Branson inverted this and the Virgin crew wore high-end designer uniforms with lots of bright and stylish colours.

Virgin crew looked like models. Everybody stared at them as they swaggered through the terminal.

This not only made Virgin Atlantic stand out but it felt aspirational.

The cabins of BA planes were drab, grey and plastic. Virgin on the other hand created stylish, colourful interior designed seats and fittings.

The seats on Virgin Atlantic were more comfortable, with more legroom.

Virgin was the first airline to introduce personalised entertainment systems when passengers on BA flights were still sharing a communal screen at the front of the cabin.

BA copied them of course. So Virgin was the first airline to introduce seatback screens.

Then they introduced qualified masseurs in first class.

Virgin was the first airline to introduce premium economy. Long haul flights traditionally had an economy, business and first-class section.

Branson saw a gap and introduced a service in between economy and business class, which massively increased profits.

Branson disrupted the airline industry by turning boring long haul flights that were a necessary evil for business travellers and holidaymakers into an enjoyable experience.

Passengers loved it. And told their friends about it, who booked on Virgin Atlantic flights — rinse and repeat.

He is a master at generating word of mouth as a result.

He does this by constantly analysing the competition and looking for gaps and opportunities to provide more value by thinking differently.

Rory Sutherland is quintessentially British. He’s also the vice-chair of Ogilvy Advertising. In his best selling book, Alchemy he talks about innervation.

I’m not sure I entirely agree with the definition but his examples are great:

Coke has been the biggest soft drink on the planet for 150 years.

Many brands have tried to topple their crown over the decades. In order to compete with coke, conventional logic would suggest you create a soft drink that is cheaper, tastes better and is served in a bigger can to provide extra value.

Every brand that has tried this has failed.

The drink that is Cokes main challenger globally is Red Bull.

Red Bull tastes worse, is far more expensive and comes in a much smaller can.

Red Bull vs Coke defies logic but that is what innovation is. It’s the opposite of logic, which is illogical, of course. Everyone is thinking logically. So everything looks and sounds the same.

Logic is the status quo. It’s conventional wisdoms. There are plenty of times when thinking logically is the appropriate course of action.

Innovation and strategy just aren’t two of them.

Everyone is solving the same problems with the same thinking.

This is what creates crowded, over competitive markets and piss poor strategies.

If you look at what Virgin did to gain a competitive advantage it did the opposite of what British Airways were doing.

Branson took every service British Airways provided down to the uniforms of the cabin crew and did the opposite to stand out and gain a competitive advantage.

The conventional wisdom was adding more machine guns and crew to bombers would protect the planes more. That was logical.

In innovation and strategy, you will see this pattern time and time again.

Next time you have a problem to solve use logic and then as a thought experiment flip it and see what the illogical solution would look like.

This is where you will find the kernels of innovation.

Gaining a competitive advantage is not about us, it’s about value and the market.

Disruptive creative strategies work because they provide more value to the market in a unique way.

IKEA: Designer, stylish furniture so cheap anyone can buy it

Airbnb: A home away from home

Tesla: Electric cars that stand for performance and economy

So there you have it; be more illogical. Be weird, be brave and think differently.

The 1-2-1 workshop places have all gone — thank you! I’ll release some more places next year.

For, 2022, I’m releasing Innovation and Strategy workshops for SMEs. Maximum 10 people, who will learn frameworks for having breakthrough ideas and disruptive creative strategies.

Each bespoke workshop is designed around the companies needs.

Consultancy work: For founders who want to stand out and gain a competitive advantage by thinking differently.

Simply reply to this email if any of the above tickles your fancy.